Dynacol™ Zeolite powder has a role in:
• Promoting healthy skin, vibrant coat & strong nails
• Aiding the immune system to function efficiently
• The trapping and removal of heavy metals
• Improving the absorption of nutrients

During its formation the zeolite traps valuable trace minerals such as calcium, magnesium and potassium within its framework. The zeolite’s porous ‘honeycomb’ structure, stability and strong negative charge allow it to electro-magnetically trap and hold positively-charged particles, such as heavy metals and other toxins. In order to take on positively-charged ions and toxins, it discharges its beneficial trace minerals through the process that is known as cation exchange.

Ball-milling and jet-milling are the conventional methods of micronising and activating zeolite, however they produce a far less efficient product. Dynacol™ is also a vast improvement on TMAZ technology and has taken zeolite benefits once again, to the next level.

Although there is no current option to certify rock minerals as organic, Dynacol™ Zeolite is accepted for input into organic production.

There are no reviews yet.

Be the first to review “Dynacol Zeolite” Cancel reply 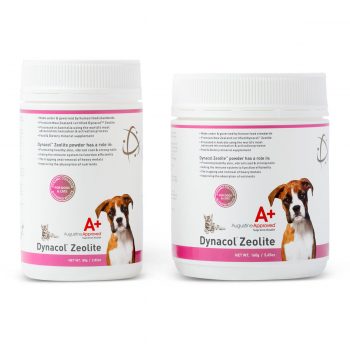 Order online and pick up in our store. Once your order is ready for pickup, we will notify you by phone. Dismiss